Patti Smith, in Interview Magazine, on art and Robert Mapplethorpe:

But the artist has to struggle beneath that canopy, just as we struggled beneath a different canopy—though ours wasn’t as overwhelming. I think that true artists just have to keep doing their work, keep struggling, and keep hold of their vision. Because being a true artist is its own reward. If that’s what you are, then you are always that. You could be locked away in a prison with no way at all to communicate what’s in there, but you’re still an artist. The imagination and the ability to transform is what makes one an artist. So young artists who feel overwhelmed by everything have to almost downscale. They have to go all the way to this kernel and believe in themselves, and that’s what Robert gave me. He believed in that kernel I had, you know, with absolute unconditional belief. And if you believe it, you’ll have that your whole life, through the worst times.

And here’s my favorite picture of Patti Smith: 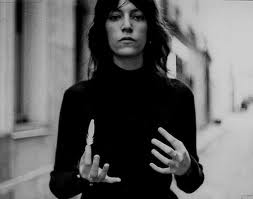 Find what you’re looking for: